Ben Weasel is one of most maligned, polarizing and interesting characters in the punk scene. He’s captained two defining bands, authored 2 books, is presently working on a musical and has effortlessly pissed off most of the “punk” scene. Gonna apologize in advance if I get anything wrong and do my best shed some light on a nasty rumor or two. Strap in and take a ride to the punk house.

Ben’s first and most notable band Screeching Weasel started in 1987 in Prospect Heights Illinois and became a fixture in the chicago punk scene. Their alumni over the years has boasted some heavy hitters such as Mike Dirnt, Mass Giorgini, Aaron Cometbus and Dan Vapid. They are probably the most influential band to pop punk/power pop/emo since the Ramones. Their brand of punk has covered quite the broad spectrum from weird pop culture fantasies to the pretentiousness inherent in the more leftist portion of punk rock.

1987 brought us their self titled debut. The album was around only briefly at the time as Underdog Records had no interest in re-pressing after the initial copies sold out. It was re-issued in 1997 by VML Records. This album is great for the hard core fans but easily their worst or best album depending on perspective. I enjoy it but would not play it to introduce someone to the band. The highlight is early versions on some of the band’s better known songs being, Murder in the Brady House, My Right, Hey Suburbia, and I Hate Led Zeppelin. It’s worth a listen if you love Screeching Weasel or just some kind of music nerd.

In 1988 Weasel put out Boogada, probably their best known album. This was their debut on Lookout Records. This featured better produced versions of a few tracks off of their first album. This effort sees the beginnings of their transition from strange near hard core to the pop punk powerhouse they are today. One of the stand outs on this is Nicaragua which seems like a fuck you to the over sensitive crusties. This was also one of the first appearances of the famed cartoon weasel character.

1991 gave us My Brain Hurts. This showed the band in the more pop punk/ Ramones-Core direction. This featured backing vocals with the edition of Dan Vapid and a better, more rounded out sound. A highlight from this is one of my favorite Weasel songs, Science of Myth, a song that still affects me to this day. This release took the weasel to new heights in popularity.

In 1992 Weasel released an album that changed my view on punk rock in general and was the first one I ever heard. It was titled Ramones. This is a cover of the entire first Ramones album done in Screeching Weasel’s own break neck pace. The repress also had the Formula 27 EP tacked on at the end and is entitled Beat Is on the Brat. This is the version I got. This was their first album to be recorded at Sonic Iguana studios with Mass Giorgini producing, a unit that has put out many of pop punk’s greatest releases.

Following the Ramones celebration was 1993’s Wiggle. The band’s most solid album. It featured a number of songwriting collaborations with Joe Queer and one with Aaron Cometbus. The highlight of this is the entire album. Though Crying in My Beer and High School psychopath near have their own life beyond this release. Supposedly there have been regrets about some of the songs chosen for this album which I don’t get personally.

Also 1993 brought us Anthem for a New Tomorrow, yes they are that fast. This was a bit more straight up than Wiggle. I think part of that was the bulk of the tracks were written strictly by Ben Weasel. It continued their legacy as pop punk titans. Their instrumentation and lyricism had jumped by leaps and bounds at this point.

1994 brought what was initially going to be Weasel’s last album, How to Make Enemies and Irritate People. Dan Vapid had left the band at this point. Green Day’s mike Dirnt had been recruited to fill in. The recording does show the strain the band was feeling. It was still a great album nonetheless. It’s still classic Weasel even if a bit tired. This also marks their final release with Lookout Records. It really looked the Weasel was out to pasture.

1995 brought us an interim album, Kill the Musicians. This is packed with a bunch of goodies such as b sides and vinyl only stuff. A definite must for the hard core Weasel fan. Cut to 1996. Reformed Weasel with a new album, Bark like a Dog on a new label, Fat Wreck Chords. This alum sounds a lot more alive and in tune with Screeching Weasel than their prior effort. They sound more alive. This was their only album to hit Billboard at #34. Bark gave us Cool Kids which is an excellent Weasel track.

1998 kicked in with Television City Dream. Vapid had again left the band and Mass Giorgini was filling in on bass along with producing the album. This is a blend of the Weasel pop sound with a blend of the harder edge found on their earliest work. It was yet another solid effort from the Weasel. They were still on Fat Wreck at this point.

In 1999 Weasel released their overall most interesting album, Emo. Interesting due to a lot of the song writing sounding like a lot of mid western punk that was being labeled as such and the obvious fact that this band’s music had an influence on the scene. Though I doubt this band ever stole their sister’s clothes, make up and hair products. This whole album stands out as it was quite different from anything the band had done. They had split from Fat and released this on Panic Button Records which was run by founding member Jughead.

2000 saw the release of Teen Punks in Heat. Another solid release from the band. It looked like they were in a full fledged reformation as they had played two sold out shows. Their first live performance in seven years. But Weasel broke up again and wouldn’t release another album for 11 years.

2011 marked Weasel’s craziest year to date. They were back on Fat Wreck and with a new album, First World Manifesto. Some of it takes stabs at everything that”punks” like Fat Mike are about. Along with this was the incident at South by Southwest. A female member of the audience had been throwing ice and spitting at Ben through the duration of their set. After an hour Ben lost it and threw a punch at her, guess you shouldn’t screw with the band, then the club owner rushed Ben and he defended himself. Following this was much of the punk scene forming a lynch mob. His own band threw him under the bus and got shit canned as a result. Fat Mike was of course full of self righteous indignation due to him being such a stand up guy, right.

Aside from Screeching Weasel and polarizing fans Ben fronted another highly influential group, the Riverdales. They took the Ramones influence to new levels. Lead vocals were shared between Dan Vapid and Ben Weasel. Really amazing band. They released 5 albums between 1995 and 2010. I’m pretty sure this band is dead as Vapid was one of the people to turn on Ben the moment the wind blew wrong.

Along with this Ben has put out 2 solo albums and 2 difficult to find books. After 23 years the Weasel marches on. Honestly I think Ben exemplifies punk more than a number of artists in the scene. It’s supposed to be a bit unfriendly and dangerous. You want safe, go listen to some shitty pop music. Ben screwed up and apologized. Get over it. As for Vapid and crew, you betray your band, you deserve the unemployment line. If you know Ben’s band, give another listen, if not, check ‘em out!
-Maty Almost 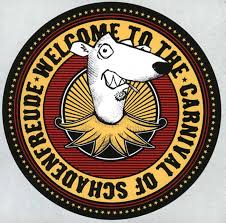