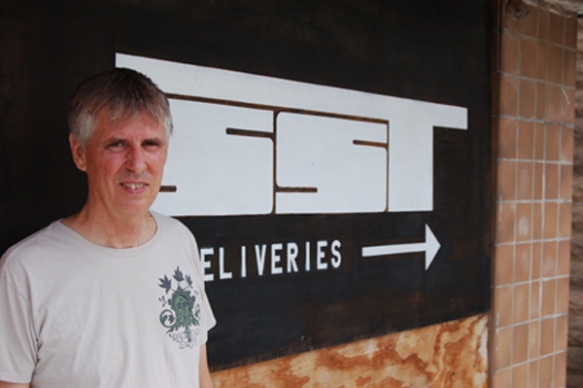 Let It Burn marked Greg Ginn’s third solo release in less than a year, following an extended period away from the spotlight to run his SST, Cruz, and New Alliance labels. (Only figures like Frank Zappa approach such prolific drive.) As is true of his other solo albums (Getting Even, Dick), the emphasis is on raw, angular noise that sneaks up and steps on your expectations. Ginn’s songwriting remains preoccupied with personal freedom and the ways people betray each other. A resigned misanthropy hangs over tracks like “Drifting Away” (“If you want the truth, you’ll have to wait for that”), and “I Don’t Want It” (“I can’t stand the waiting anymore/I need you like a hole in the head”). “On a Roll” fires off an edgy declaration of intent, while the guitars sputter and snarl underneath the rhythm (“I don’t wanna think I’m wasting away”). There’s no love or escapism here. Ginn naturally vents his paint-peeling instrumental side. “Lame Hollywood Cop” is punked-out hip-hop driven by shuddering guitars and ferociously slapped bass. Ginn plays with a similarly percussive slant on “Military Destroys Mind/Body.” “Exiled From Lame Street,” on the other hand, effectively flicks between low rider-style funk and a stoner’s crawl to make its mournful point — with plenty of squawking leads to match. On the minus side, this album’s not as distinctive as other Ginn offerings. A nagging sameness dogs the arrangements — “Lame” pops up in three titles — and Ginn’s vocals are workmanlike at best (when you can hear them). Students of the rapid-fire, dirty-bottomed guitar chunk that characterized his Black Flag days will probably appreciate Let It Burn most; otherwise, stick with Getting Even. 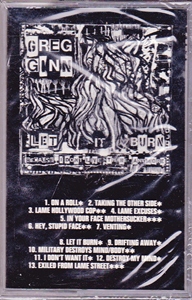 Unquestionably the most influential guitarist to emerge from the late-’70s/early-’80s U.S. hardcore/punk movement was Black Flag’s Greg Ginn. Never afraid to incorporate other musical styles into his playing (namely jazz fusion and Black Sabbathy heavy metal), as well as squealing feedback from his amplifier, Ginn’s guitar also served as a major ingredient to the Black Flag sound as he was the only original member to remain in the group from its formation until its demise. Influenced equally by the Grateful Dead and the Stooges, Ginn formed Black Flag in 1977, but the group didn’t really start to make a name for itself until Ginn set up shop in Hermosa Beach, California in early 1979, where he began running an electronics supply business. It was during this time that the phrase “SST” was coined (an abbreviation for Solid State Transmitter), which would eventually be used for the name of Black Flag’s record label. Although members came and went at a steady rate (including singers Keith Morris, Ron Reyes, and Dez Cadena), Black Flag prevailed, building a large and loyal following on the strength of their explosive live show, EPs/singles (including such classics as Nervous Breakdown and Jealous Again), and an appearance in the cult classic L.A. punk documentary The Decline of Western Civilization. Ginn also began to favor a Plexiglas “Dan Armstrong” guitar, which would soon become a trademark of sorts for both him and the band (despite eventually becoming covered with black tape).

Black Flag began to make a nationwide impact when big-time Flag fan Henry Rollins signed on as the group’s fourth vocalist, which resulted in the group’s first-ever full-length album, 1981’s Damaged, considered by many as one of the greatest hardcore albums of all time. Although legal red tape would keep Black Flag from issuing a follow-up as quickly as they would have liked (which included Ginn being sent to jail for five days), the band returned more ferocious then ever, with such releases as My War and In My Head, among others. Black Flag also managed to issue a completely instrumental release, Process of Weeding Out, which inspired Ginn to launch his own instrumental project, Gone, resulting in a pair of releases around this time as well, Let’s Get Real, Real Gone for a Change, and Gone II: But Never Too Gone. Additionally, Ginn launched another side project around this time, October Faction, which included contributions from many other SST artists. Black Flag broke up after a final U.S. tour in 1986, and while many assumed that Ginn would simply play with Gone full-time, he decided to focus on record company work, forming an all-new label, Cruz, while running the Minutemen’s former label, New Alliance, as well as SST.

The early ’90s saw Ginn return from his exile as he began issuing solo albums, including such titles as Getting Even, Payday, Dick, and Let It Burn, as well as surprisingly relaunching Gone. Ginn has also performed alongside other acts (Mojack, Hor, Killer Tweaker Bees, etc.), briefly operated a coffeehouse, The Idea Room, and has been known to appear under an alias, Poindexter Stewart, on his own radio program, Screw Radio. In 2003, Ginn put together a new version of Black Flag (he and Cadena were the only recognizable names) to perform benefit shows for several different cat rescues. Ginn moved to Taylor, Texas in 2004 and created a new instrumental band called the Texas Corrugators; he played everything but drums, which were handled by Steve DeLollis.

They recorded two albums, Bent Edge in 2007 and Goof Off Experts in 2008. (Live outings included different personnel, with Ginn on bass and guitar, with guitarist Gary Piazza and New Monsoon’s Sean Hutchinson on drums.) Ginn describes their live sets as being 100-percent live improvisation incorporating rock, jazz, Latin, psychedelia, and country. In 2010 he changed the name of the band to the Taylor Texas Corrugators and released the album Legends of Williamson County on SST. Meanwhile, he continued to release experimental albums under his own name, including 2011’s We Are Amused and 2013’s.

Album: VinylTitle: Greg Ginn – Let It Burn (Because I Don’t Live There Anymore)

Greg Ginn And SST History In The Making

Born in Tucson, Arizona. Greg Ginn was an American guitarist, songwriter, and singer and business owner. He is best known for being the leader of and primary songwriter for the hardcore punk band Black Flag, which he founded and led from 1976 to 1986, and again in 2003. The band announced another reunion on January 25, 2013.