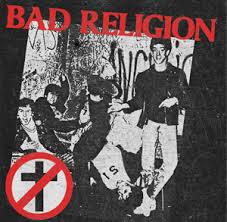 In the initial writing of this article it was kind of weak and I realized it could be much better. Without sacrificing the original content, here’s the re master of an article many of you enjoyed.
Bad Religion, the band that really got me into punk rock when I first bought 1998’s No Substance by pure happen stance. Bad Religion is into their 34th year of punk rockin’ it. They started up in 1979 in Los Angeles, CA. First show was November 11th 1980 in Burbank, CA. Back when the now widely known Epitaph Records was nothing more than a name and P.O. Box that Mr. Brett put on the album sleeves to say “yeah, we have a label.” Their music has been instrumental in shaping the sound of both the original hard core scene and the later melodic hard core genre. Greg Graffin himself who holds numerous advanced degrees in a variety of subjects and currently boasts 3 books covering religion, Anarchism, evolution and Naturalism has caused many a punk rocker to get educated whether by institution or self. It has definitely been instrumental in my own studies of varying subjects. They currently stand at 16 full length studio albums making them one of, if not the most prolific punk band along with 35 for years without any hiatus periods.

Bad Religion first graced us with a recording in 1981. This was their self titled EP. At only 6 songs it kicked in the door on what we knew of punk and hard core. This release set the precedent with punk that was both aggressive and the smartest thing we’d heard since The Clash. The playing was as fast as it was tight. It didn’t sound like teenagers with no real record label as of yet.

The following year, 1982, would bring us How Could Hell Be Any Worse? They were even more solid with an improved recording quality. At this point Graffin still had a raspy growl to his voice and they’d not started playing with harmonies yet. This record has been catching fire in the scene on a continuous basis since its initial release. It’s still as good 32 years later.

1983 was a… interesting year for the band. They released Into theUnknown. This was an apt title as it’s a weird keyboard driven album. Nothing like any of the band’s other releases. Still a great album, just unusual. It has become easier to find as time has gone on.

1985 gave us back the Bad Religion we all know. The well titled Back to the Known EP. This was the band back to hard core punk. Greg’s voice had changed for the better and it was the beginning of the “oozinahhs” that we’ve come to know them for. It was awesome to have this treasure of the scene back in the form we know and love. 1988 brought their next studio album. At a time when the punk scene had gone to sleep, this was a needed slap in the face to re ignite things. This was the real beginning of Bad Religion as we know them now. This was a 26 minute blast in the face of hair metal. Possibly the most necessary punk albums of the 80s. They had become a bit more melodic with multi part harmonies that only added more teeth to their sound.

1989 saw the release of No Control. This was faster and harder than Suffer without sacrificing the newfound harmonic ideas that had cultivated in Suffer. This contains a standout for me, the first Bad Religion song I’d ever heard, I Want to Conquer the World. I was 16 and this single song changed my life. This began my love affair with punk rock music and my quest to better understand a world I’d been developing opinions about. Following this was 1990’s Against the Grain. This was more complex than any previous album. ATG was the first feature of the anthem like 21st Century Digital Boy. About half this album would fall onto a “greatest hits” comp.

1992 gave us Generator. BR was pushing their musical and lyrical complexity even further while staying the unrelenting punk maelstrom we’d com to know. Generator gave us BR’s first ever video single for the amazing track, Atomic Garden. The ideas expressed on the album would be the beginning of what we hear from them for the next 22 years.

1993 brought in Recipe For Hate which opened with one of the most aggressive title tracks in punk rock. Recipe also contained 2 video singles for American Jesus and Struck a Nerve. The blend of sonic and complex was becoming more apparent by now. The signature harmonies were fully solidified by this release. Recipe would be BR’s final pairing with Epitaph for nearly a decade.

1994 spat out a new album on a new label. Stranger Than Fiction appeared on Atlantic Records. It doesn’t sound at all like the major label boogey man had stolen any fight out of this unit. This put out 4 singles and videos, better unleashing Bad Religion on an unsuspecting world. There were some great collaborations with Wayne Kramer, Tim Armstrong and Jim Lindbergh. A lot of fans bitched about this album sucking; I think they just weren’t smart enough to get it.

1996 brought about The Gray Race, a more aggressive album than Stranger. Mr. Brett had left the band to solely concentrate on Epitaph. Filling his spot was Minor Threat’s Brian Baker. Much like the entirety of their Atlantic years, this was met with a lot of negativity that I don’t understand. Guess that’s what happens when people listen to the punk police instead of deciding for themselves. Fuck the rules and just be punk! This continued the formula of being pure amazing expressed through music.

1998 saw No Substance, the first BR album I bought. This is a front to back solid album. Still my favorite from the Atlantic years. It features a weird spoken word track, State of the Union at the End of the Millennium. It still rings as relevant today as it did in ’98. This was their least successful album, yet again, people just didn’t get it.

May 9th 2000 at punk fifteen in the morning Bad Religion’s final album on Atlantic was released. The New America was Bad Religion’s most personal album, some politics, but more sonic introspection. Mr. Brett was even coming back in as he co wrote a track. From here the crew would head back home to Epitaph.

2002 brought us BR’s most anticipated album in years. Mr. Brett was back and the band now had 3 guitarists. The Process of Belief is as amazing of an album as was expected. The Greg and Brett formula picked up as though it had never left off.

2004 Bad Religion released an album that pushed the boundaries and complexity even further. Empire Strikes First was a politically charged blast that showed even an overture can be punk rock. The 3 guitar attack had fully come into its own creating a wall of sound not previously heard in the genre. The hills of Los Angeles are still burning.

It would be a 3 year wait until New Maps of Hell arrived in 2007. This album was solid enough to be worth it. The band had made it to the 27 club. It features the most intricate guitar work of the band’s career and pulls it off without sounding the least bit bland.

In 2010 their 30th anniversary brought an album reminiscent of their older material, The Dissent of Man. It rocks similar to Generator. It was a breath of fresh air to see this punk monolith getting back to basics.

2013, exactly 11 years after Process of Belief Bad Religion released their most back to basics album, True North. It flows like No Control. This is the blast from the past it’s been hailed as. Sadly, Greg Hetson has had to leave the band following this due to personal problems. The Bad Religion story doesn’t end here as they’re working on a new album. 34 years isn’t enough!

As far as I’m concerned every album by these guys has been great. Even their “dark period” as Graffin calls it when Mr. Brett had temporarily left the band. My favorite album is still the All Ages compilation. 2nd album I got from them and it just blew my mind. Still hits me just right all these years later. This band has been attached to some of the best times in my life and been a soundtrack to getting through some of the worst. Other than the impact of the band themselves, Epitaph has been a force for putting punk on the map with a number of seminal releases in the 80’s and 90’s scenes. Also their sub labels of Hell Cat and Burning Heart have done the scene a lot of good. BR has been a driving force in my constant effort to keep up on the increasingly fucked world we inhabit. So, if you don’t know this band, research and hear now! If you’ve not listened in a while give ‘em another spin and see if the magic is still there.